At last, a myth told from the female perspective! Both devotees of mythology and skeptics traumatized by a boring high school experience will be captivated by page-turning adventure and female empowerment in Madeline Miller's reimagining of mythology's bad girl. Easily balancing an exciting narrative with sumptuous, lightly-elevated language and touches of humor, Circe is an engrossing feast for the senses and unique in its imaginings of scenes missing from mythology. Our opinions of Circe come predominantly from Homer's The Odyssey, which reduces Circe to a sorceress who turned sailors into pigs. A minor character, Circe either enchants with ill intent or serves the heroes Odysseus and Jason (of golden fleece fame) on their journeys. Miller moves the woman from the sidelines to the forefront of her story.

More than many reinterpretations, Miller's work captures the underlying emotions, motives, and foibles contributing to Circe's choices, reminding us that the person one grows into is influenced by experience, trauma, and how others treat them. Despite being about an immortal, Miller's book says a lot about being human and female.

Circe is born to Helios, Titan god of the sun, and the nymph Perse. A disappointment as nymphs go, Circe's golden hair is streaked with brown, her chin is too pointed, and worst of all, her voice sounds human. She doesn't care for preening and gossiping and only craves her father's attention. Yeah, Circe has daddy issues. Since nymphs (read young women) are valued most for their beauty and charm, Circe becomes the brunt of ridicule, even from her mother. She dabbles in spells, and like other jealous goddesses, she lashes out, turning her rival cousin Scylla into a monster. This heinous act is the second most familiar tale about Circe, which also appears in Edith Hamilton's and Thomas Bulfinch's Mythology. Circe's siblings all perform witchcraft covertly, only she admits to seeking such knowledge. Lacking allies won by flattery and refusing to play games of subterfuge, Circe is exiled to a deserted island.

Circe's reputation as an evil sorceress is cemented after a ship lands on her exile island. Unlike most immortals, Circe feels compassion for human suffering and she allows the starving sailors into her home, giving them food and wine. But she sees their hungry looks, both at her riches and herself—a woman living alone with no man to protect her. Only after the captain assaults her and the crew is about to follow his crude example, does Circe transform the men into pigs. For the reader, there is a darkly cathartic satisfaction in her actions. Even in ancient Greece, the poet shows us, “men are pigs.” Miller turns this aphorism on its sow ear. “After I changed a crew, I would watch them scrabbling and crying in the sty, falling over each other, stupid with their horror. They hated it all, their newly voluptuous flesh, their delicate split trotters, their swollen bellies dragging in the earth's muck. It was a humiliation, a debasement. . . . Come, I would say to them, it's not that bad. You should appreciate a pig's advantages. . . . They never listened. The truth is, men make terrible pigs.”

I cut my teeth on Greek, Roman, and Egyptian mythology and remember my childhood confusion about the stories of nymphs begging gods to help them escape from pursuing males. These myths ended with the female character getting her wish and changing into flora or fauna to avoid her suitor. Daphne fleeing Apollo becomes a laurel tree, Syrinx fleeing Pan morphs into river reeds, Asteria, a Titan goddess fleeing Zeus, metamorphosed herself into the island of Delos. And these are the ones who got away. This list doesn't include the females who were deceived by gods in disguise and bore them offspring. The mythology books and record albums of my childhood eliminated all references to sex. My innocence could not comprehend why a girl would rather be a tree for all eternity, than allow a god to catch her. Now I know. In Miller's capable hands, Circe gives voice to the plight of nymphs, the fear of every woman. “Brides, nymphs were called, but that is not really how the world saw us. We were an endless feast laid out upon a table, beautiful and renewing. And so very bad at getting away.”

In a scene that neatly sums up the disparity between the sexes, Circe transforms herself into the appearance of her powerful brother. The male soldiers that scoffed at her as a woman playing dress up in the captain's cloak, suddenly obey her authority when she looks and sounds like a man. “I almost wanted to laugh. I had never been given such deference in my life.”

Any enthusiast of mythology knows that the immortal gods, goddesses, demi-gods/goddesses are like petulant adolescents, easily offended, jealous, grudge holding, and belligerent. Better than any vampire novel, Circe addresses the tedium of immortality, the sameness that creates a desire to shake things up, to toy with humans and each other for amusement. “The gods love nothing more than novelty.” Despite having eternity to figure it out, most immortals continue in the same patterns, never growing or moving forward. Circe realizes that her life is not her own, “Every moment of my peace was a lie, for it came only at the gods' pleasure. No matter what I did, how long I lived, at a whim they would be able to reach down and do with me what they wished.” Circe, the powerful enchantress, becomes empowered.

Fear not, the novel balances negative experiences with the positive ones of passion, love, motherhood. Miller's depiction of maternal Circe captures the wild devotion, ever-present fear for a child's well-being, and limitless love of motherhood. Circe's child behaved very like my own—never sleeping, always crying yet hating to be held, constantly courting death. Reading about the challenging child brought me viscerally back to the extremes of parental emotions, from exquisite delight to murderous frustration, in a way no other writing had.

Read the book soon, as an HBO Max miniseries based on the novel is in the making and you should experience the power and nuance of the original first. The eight-episode adaptation is by Amanda Silver and Rick Jaffa, who penned the Planet of the Apes reboot—a curious match for Miller's lyrical tale. Was Sofia Coppola unavailable?

Learn more about Madeline Miller and purchase her book here.

Tells Her Own Story 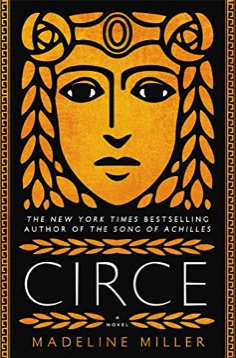